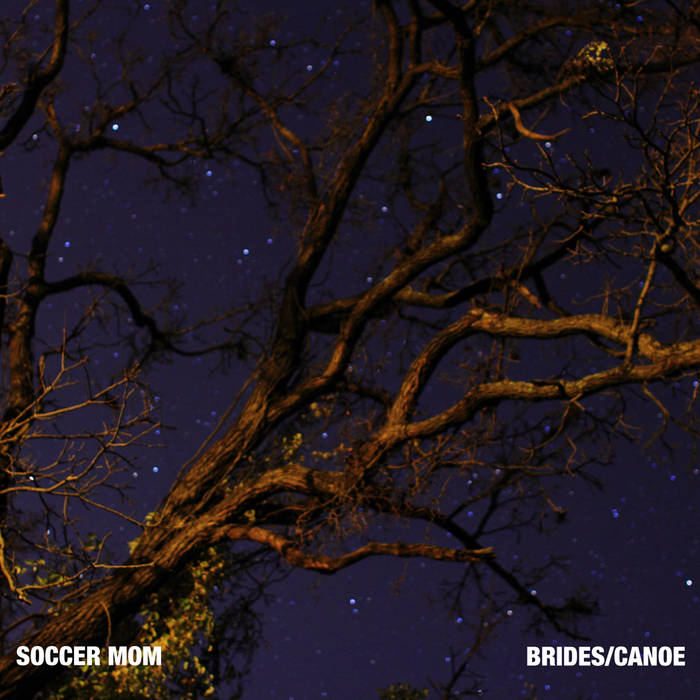 "The sound takes me right back to the first two Ride releases and maybe a little Catherine Wheel." JAMIE MYERSON, WDNK 91.5

"Soccermom sets off new parts and bridges with a patient efficacy; powershrugs into exuberant crescendoes with nonchalance. Everything about Soccermom's music seems informed not only by the best music of two decades past, but also a measured, casual attitude toward crafting good music." JAY BREITLING, CLICKY CLICKY MUSIC

Following the triumphant release of their debut 10”, 100m Records present the Brides/Canoe single from Boston's Soccer Mom. The band, which is drawn together from a medley of different groups, consists of Dan Parlin, Danielle Deveau, Justin Kehoe, and William Scales. Their origins lie in the late 2000's when singer/guitarist, Parlin, returned to Massachusetts from San Francisco armed with a wealth of ideas that, with time, brought the group to life.

After serving in a range of Boston acts, including E.R., Get Help and The Spanish Armada (all on The Beatings' Midriff Records imprint), Parlin cemented the foundations of Soccer Mom when bassist Deveau joined full-time. In due course fellow E.R. sideman and Spanish Armada principal William Scales enlisted as second guitarist, along with Spanish Armada drummer David Kaplan.

In 2010, with what they describe as "a collective caesura among the various competing projects", the band reaped well- deserved attention for their debut 7". They have since released the breath-taking 6-song EP, You Are Not Going To Heaven, to general critical acclaim.

"There's no denying the band's strong '90s influences — with a distinct New England color —a listen to the new EP proves Soccer Mom owns it." NERVE

"This is a really great EP that delivers on the bands promise of contrasting sounds and styles. There's melody and feedback, rapid drum fills and dreamy vocals." THE 405
The departure of Kaplan in early 2011 left vacant the drum chair for another E.R. cohort, drummer Justin Kehoe, with whom they continue to deliver their blistering live performances.

Soccer Mom's distinct sound emerges from a detailed exploration of intimate connections between contrasting forces. Through melody and dischord, clean tones and chaotic feedback, they find a balance between the referential and the staggeringly new. The vocals are often sparse and quietly deconstruct conventional song structure amidst a whirlwind of dual guitar histrionics.

When asked to describe the band in his own terms, Parlin states:

"We're all coming from so many angles, influence-wise. I mean, it's rock music - but it's not punk, and it's not just noise. It's not quite dreamy enough to be shoegaze, but it's also not hard to hear all of those pieces sneak in... When people ask us what kind of music we play, I just say "loud". It's not much to go on, but at least you'll remember to bring earplugs to a show."

Brides/Canoe was recorded by Kevin Micka and mastered by Scott Craggs at Old Colony Mastering. It is released through 100m Records on November 6th, 2012, as a digital single ahead of a highly anticipated full-length expected in 2013.

"With liberal doses of sludge, screeching feedback, dischord and strong melodies, Soccer Mom issued one of the years most arresting and addictive listens." THE ASH GRAY PROCLAMATION

"Soccer Mom have a jangle that weighs heavy, at times sneaking into the realm of post-rock, while their dream-pop tendencies are too immersed in noise and impatience to float without direction. " EXPLODING IN SOUND

"This, their debut, is a stunning, guitar-driving, neo-shoegaze set, but their blistering live show is usually even better."
BRADLEY'S ALMANAC

"Warm, loud, and fuzzy in all the right ways, Soccer Mom make music to submerge one's brain into, just perfect guitar music to disappear into and never look back." THE CREATIVE INTERSECTION
  
 "Sonically superb. Long sustaining notes paint out the walls, while a buzzy bass marches down the middle, jaunting out its own fuzzy, buzzy melodies." CD ON SONGS, BOSTONBANDCRUSH.ORG

"Soccer Mom are not afraid to embrace their shoegaze influences whilst experimenting with something new." THE ART OF STUFFING

"Clouds of melody, both of the real and phantom variety, wrap around thick basslines and all-business drums like crawling ivy to produce a sum greater than the individual parts." MICHAEL FOURNIER, YOURBAND.INFO

"A great melding of jangly indie-rock/pop and subtle jabs of harsher/woozy feedback." BUILT ON A WEAK SPOT